16 Days of Activism against Gender-Based Violence – 5456 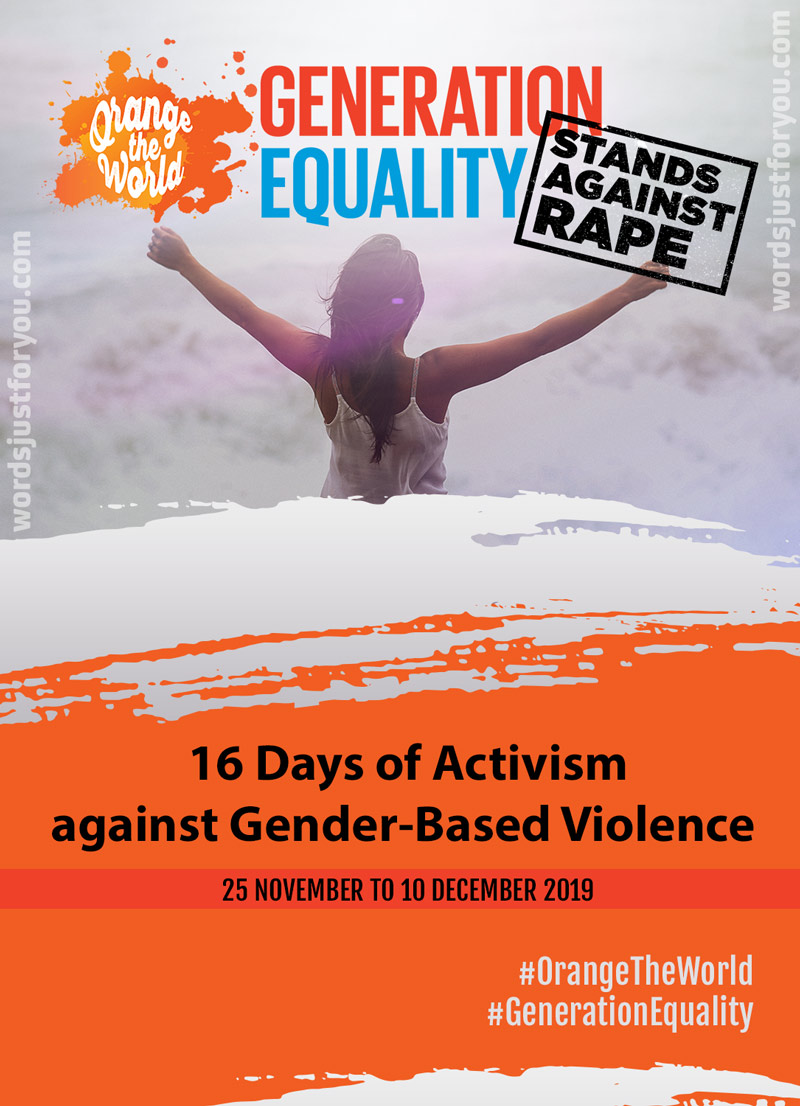 The 16 Days of Activism against Gender-Based Violence is an annual international campaign that kicks off on 25 November, the International Day for the Elimination of Violence against Women, and runs until 10 December, Human Rights Day. It was started by activists at the inaugural Women’s Global Leadership Institute in 1991 and continues to be coordinated each year by the Center for Women’s Global Leadership. It is used as an organizing strategy by individuals and organizations around the world to call for the prevention and elimination of violence against women and girls.

In support of this civil society initiative, under the leadership of the UN Secretary-General, António Guterres, the United Nations Secretary-General’s UNiTE by 2030 to End Violence against Women campaign (UNiTE campaign) calls for global actions to increase awareness, galvanize advocacy efforts, and share knowledge and innovations. In 2019, the UNiTE campaign will mark the 16 Days of Activism against Gender-Based Violence, from 25 November to 10 December, under the theme, “Orange the World: Generation Equality Stands against Rape!”

While the names, times and contexts may differ, women and girls universally experience rape, sexual violence, and abuse, in times of peace or war.

Rape is rooted in a complex set of patriarchal beliefs, power, and control that continue to create a social environment in which sexual violence is pervasive and normalized. Exact numbers of rape and sexual assaults are notoriously difficult to confirm due to frequent latitude and impunity for perpetrators, stigma towards survivors, and their subsequent silence.

In recent years, the voices of survivors and activists, through campaigns such as #MeToo, #TimesUp, #Niunamenos, #NotOneMore, #BalanceTonPorc, and others, have put the spotlight on the issue of sexual violence and have reached a crescendo that cannot be silenced or ignored anymore.

That is why, under the umbrella of UN Women’s Generation Equality campaign that marks the 25th anniversary of the Beijing Declaration and Platform for Action, the UNiTE Campaign is calling on people from all walks of life to learn more and take a stand against the pervasive rape culture that surrounds us.

Join UN WOMEN! Share your photos, messages and videos showing how you are participating in the campaign on Facebook, Instagram, and Twitter using #OrangeTheWorld and #GenerationEquality. You can also join the conversation on social media by sharing our campaign materials that you can download here. For more information about “Orange the World: Generation Equality Stands against Rape” and action ideas, see this year’s concept note.